Established by 2, and perfected by 4 – 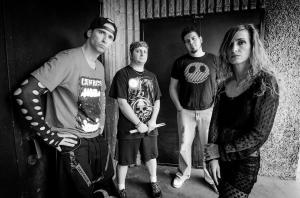 With the help of founding Member Adam Easterbrook (skins), the vision soon melded itself into what has become a mid west powerhouse in raw riffs, body slamming beats & broken necks.
With their 2013 release ‘Too Bad They Multiply’ – Ryan Boyd (axe) & former front man Benjamin Nichols were able to capture one of the most powerful displays of raw emotion the band had ever laid on tape.
With tracks ‘Everything Falls’ – and the fast paced ‘Turtle’ – ‘Too Bad They Multiply’ saw moderate success up until the departure of then frontman Benjamin in late 2013.
Picking up right where Benjamin left off – enter Jesse Maloney (vox), who joined PIRANHA in November 2013 – shifting the band in a new direction of simplified, post grunge inspired screams, skats & vocal drops.
Within a few short sessions, PIRANHA landed at Transient Audio in Minneapolis MN to record ‘JUNK PUNCH’
(their newest creation releasing March 2015) – and found themselves sharing bills & venues with some of their idols in Wayne Static (Static X), Sevendust & GWAR throughout late 2014.
Primed to to let hell break loose in 2015

– PIRANHA is currently prepping for a 2015 tour to support their EP ‘JUNK PUNCH’ with stops scheduled throughout the Midwest.